How I became a writer

The story of leaving my job, starting my blogging journey, and becoming ‘a writer’.

Leaving my job and starting to blog

I officially started this blog 4 months ago, whilst I was finishing up my book and still running another blog and podcast (INF Club). With the book launched, INF Club closed, and a refreshing Christmas break, I thought I'd best give The Indie Writer a proper introduction, explain what this blog is all about, and how I arrived here.

Hmm, so where to begin?

I suppose it started a few years ago, it was around 2013 or 2014, certainly in the months preceding my leaving my recruitment job of 5 years.

Truth be told, as far as the “what I'm doing with my life” thing goes, I was fairly happy until the age of 16. Just like today, I loved learning back then and enjoyed studying Macbeth (English) as much as I did space and animals (Science), the World Wars (History) and ancient Rome (Latin)... you get the idea. I loved to learn, and up until the age of 16 I was able to do so freely and without too much worry, aside from the end of year exams whilst I was always keen to do well in.

The next decade would mark a tricky time for me, though, as adulthood loomed and all of a sudden I felt under pressure to know what I wanted to do with my life. I didn't enjoy my end-of-school studies (I stayed at school aged 17 & 18 to study my A-Levels here in the UK), and I ended up dropping out of university twice, with a sandwiched year of working in my first office job in between.

And so without a university degree, and right after a global recession, I had seemingly narrow options for a “well-educated” boy who had gone to a state-grammar school. What I did know was that I wanted to, at that time, a) work with people and b) make lots of money. And so I applied for the (ironically-named) 'graduate programmes’ for a couple of big recruitment companies, and ended up as a trainee recruiter for a couple of months, before I was officially a recruitment consultant.

I stuck at it for 5 years and I'm glad I did. I learned things about myself and my capabilities, and I stepped out of my comfort zone in recruitment. When I left my 2nd recruitment company, I was a top-5 earner in that company and had gotten “good” at something I wasn't sure I could be good at, especially as I didn't particularly feel like a typical “recruiter” or “salesman”. It was a learning and growthful time for me but, by the time I'd had that “good” year, I knew that my time was up. I still remember my Christmas party that year… I’d just been presented the 'Employee of the Year' award (I won it jointly with another colleague), and everyone around me was drinking and being merry and generally having a good time... I just felt tired and empty, and I made a discreet early exit from the party.

In the weeks before that Christmas party, I'd started reading books on career change, about things like 'career crisis' and folks who had transitioned from dull corporate jobs to more fulfilling careers. I was attending the Google Campus in London after work to learn about startups, and Escape the City HQ (in Central London at the time) to hear from founder Rob Symington's own 'escape' from a consulting company and the 'Escape tribes' they were now running to help others navigate their way from unfulfilled work to work they cared about.

I was reading blogs like Scott Dinsmore’s and Chris Guillebeau's, and I came across this exciting world of blogging. In short, I was consuming information – blogs, books, podcasts – all about career change. And the stories I was most excited about were the ones involving these bloggers, these writers, who had made a life – a career even – from writing to their blogs and making money from courses and others revenue streams around their blog.

It was funny, then, that I considered or tried almost every option under the sun before taking the 'blogging as a career' thing seriously.

What I did do, however, was write and publish things online, and ran various blogs which helped me find my voice and confidence as a writer (and then later as an independent writer) alongside starting a business, going back to employed work, trying freelancing, trying to break into sports coaching, applying for various startup jobs, and thinking up various half-baked business ideas. All the while, knowing what I wanted to do as a career (blogging) but not yet believing it could be possible for me.

Throughout much of this time I was blogging mostly because I loved it. It took some time before I realised that I could actually make an income – and a career - as a blogger, aka as an independent writer.

Whilst every blog I have had has represented where I was in my life and what I was needing to write about at the time, the blog that would change everything for me was a blog called IntrovertJedi, and the one which was to eventually become INF Club – for INFPs, INFJs & creative introverts. (INFP and INFJ are Myers-Briggs personality types, in case you're not familiar with these 4-letter thingies).

One of the things I've realised is that the more something means to us, the stronger the resistance monster inside of us gets.

So it took some time for me to build confidence and belief in myself as a writer and blogger, and it explains why it took me some time to realise that I, Jas, could make it a career.

In a sense the last six-and-a-half years for me have represented stepping into my potential as a writer.

Undoing some deep conditioning and becoming ‘a writer’

Purely and simply, a writer is someone who writes. It really is as simple as that.

And yet… it took me a while to realise that and I had to undo some deep conditioning.

You see, when it comes to job titles, we put expectations on ourselves based on the “rules” we perceive to be out there.

Sometimes, these rules can be helpful. For example, a surgeon is someone required to have completed a medical degree and undergone specific specialised training. The surgeon who might have treated you or someone you know went through this process and – for you to “be” a surgeon – you have to do the same thing.

“To be a surgeon I must go to medical school and then undergo the specific training required for my chosen surgical speciality”. Makes sense.

But when it comes to writing and other creative forms, the perceived rules aren't so helpful. In fact, they are exactly the opposite of helpful. They are unhelpful and also untrue.

When it comes to writing and others creative forms, the perceived rules that we hold onto are both unhelpful and untrue.

And so when it comes to thinking about “being” a writer, the rules/expectations we tend to put on ourselves are as follows:

To be a writer, all you need to do is one thing and one thing only. WRITE.

“To be a writer, I simply need to write things.”

Suggestion: scribble the above sentence on a piece of paper, in your journal, or on a post-it note and keep it someplace where you’ll see it often.

Okay, so I had started to realise what being a writer actually was. Then what?

Well I'll be honest, the “fake it 'till you make it” stuff has never really done it for me.

But actively taking action and creating my own reality has.

Instead of faking it until you make it… take gentle, intentional action. By doing so, you’ll be creating your own reality and literally become who you want to be.

If writing is what makes one a writer, then all you need to do is write with consistency to feel like and become confident in your identity as a writer.

For a while now I've been journalling regularly. That's a form of writing. Calling myself a writer after I’d been consistently journalling (I’m talking most days) was completely valid. But… there was something missing for me.

And that missing piece was consistently putting my writing “out there”.

It's not about approval or validation from anyone else.

It's more about the empowerment that comes from writing and sharing it online, for others to be able to read and connect with it.

It's about communicating to yourself that your writing is worthy of you hitting the publish button and allowing others to discover and read it.

As I've already mentioned, I've run various blogs since 2015. They've started and they've stopped, lasting anything from a couple of weeks to a few months.

What did it for me, what made me actually feel that “I'm a writer”, was:

There’s something magical about the combination of ‘writing’ and then ‘sharing it online’.

This is why my INF Club blog was the turning point for me. I posted to that blog every week for two years.

After I’d posted there consistently for about 6 months, something started to feel different.

After around 12 months, I felt more like a writer and then, after posting for two years, I really did feel like a writer and started calling myself one. I put it in my website & twitter bio for the world to see and I inside I was like “yeah, that’s me. I’m a writer! 🤗”

In my experience, after a year or two of posting consistently to a blog, somewhere along the line you start to feel like a writer and become comfortable with this identity.

It turns out that all that all I needed to do to become a writer, was write.

And that's how I became a writer.

👤 I’m Jas :) I’m a writer, self-published author and introvert. You can read my story over here. I’m not on social media, but I’d love to send you my little weekly newsletter. 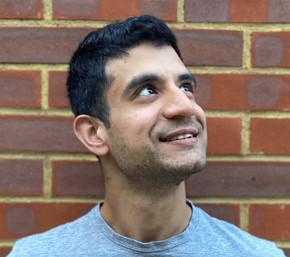